Today the Holy Bigorski Monastery was honoured with the visit of the President of the Republic of North Macedonia, Mr Stevo Pendarovski, who was warmly welcomed by our Elder and Abbot, Archimandrite Parthenius and our Fraternity. The reason behind this visit of our noble President was his personal wish to get better acquainted with the entire mission of our Fraternity, at the threshold of the 1000-year jubilee since the foundation of the Bigorski Monastery (1020-2020). He gladly accepted our offer to be a patron of this event.

According to an old monastic tradition, the Head of the state was welcomed with a ceremonious reception – ipodohi. During the ceremony, our Elder greeted the President with a welcoming speech:

“Most respectable President of the Republic of North Macedonia, Mr Stevo Pendarovski,

allow me, first, to express profound gratitude on behalf of our Fraternity, as well as of our abstinents, for the honour you have shown us today with your visit to our Monastery. Ever since monasticism was revived in this holy coenobitic Monastery and our brotherhood started its mission with socially vulnerable categories of people, you are the first President and a high politician to express a wish so openly and whole-heartedly to meet the young people of our rehab centre and make close contact with them. This obviously speaks about the nobility of your personality.

According to the monastery typicon, in the course of the reception ceremony (which by the way is called ipodohi), we chanted, among the other things, the Troparion i.e. the praise of your protector, the Holy Martyr Stephen, as well as the Troparion of the patron saint of this Monastery, St. John the Baptist. He has always kept safe and still guards this area where you come from too, and which is of great importance for our history.

The tradition of the Orthodox Church has always been to pray for those who are leaders of the nation because the prayer for the national leader is of vital importance for the wellbeing of the state and its people. Thus, the Church always prays that God would endow the national leaders with Christian virtues and with the true values, which, unfortunately, are terribly neglected today. I have in mind those eternal moral, above all, Christian values – the most important of which is the devoted love for every human being. Your today’s visit is an illustration of the presence of such love in you. Obviously, your wish to visit our monastery is an act of respect towards your people, because you have honoured us and gave confirmation and legal recognition of our mission here, especially with the young people affected by various addictions. We feel greatly dignified because you, being the President of our country, wanted to encounter the young people who are rehabilitating here from the modern time addictions and passions, which proved to be an awful pest for the society. Our brotherhood adopted this hard mission by God’s providence and with His help only. That’s why we are especially grateful you chose to meet these narcotic victims and show them in a way that you are their President too, that you are a President to all citizens, no matter what they are like. Actually, you have restored their human dignity in your eyes and proved that all people are equally worthy before society and precious to God. These young people mean a lot to the Church and to the state as well, because if a certain country doesn’t have a morally healthy young population, it is aging and it’s doomed to parish.

Therefore, we are endlessly grateful for your presence here, at the threshold the 1000-year jubilee. Namely, next year the Monastery celebrates a millennium since its foundation. On this occasion, I would like to ask you to be a patron of the official ceremony for the forthcoming jubilee. Because in the course of the next year we would have various activities dedicated to the jubilee, but next autumn we intend to schedule the main ceremony, with the presence of all the members of the Holy Synod of MOC-OA, as well as of guest from abroad and a huge number of fateful. The Bigorski Monastery is very important not only from a spiritual but also from a national point of view, because a significant number of the XIX century revivalists, our national enlighteners, received their first education at our famous monastery school and later contributed a great deal for the spiritual and cultural treasure we have today. Therefore, we should all take part in the celebration of the great birthday of our glorious Monastery.

One again thank you from the bottom of my heart for coming to Bigorski and being with us today”.

As a reply to the welcoming speech of our Elder, the President Pendarovski, having accepted the invitation to be a patron of the 1000-year jubilee, gave a very touching and noble speech:

honourable member of the Bigorski Fraternity,

today I am not here as a politician. I have come to you as a common citizen, as a man, and of course as a faithful. I must say, I have never favoured politicians who speak from the spiritual places and churches. Still, today I would like to address you and respond to the wonderful words of my generous host, Fr. Parthenious.

First, let me thank you for accepting me and letting me see all these beauties, which I have seen many times before, but never felt them so close to my heart.

Second, I want to thank you for asking me to be a patron of your manifestation – 1000 years of the Bigorski Monastery, because this monastery is considered a pillar of our spirituality. Therefore, this offer is a great honour to me. The time itself of its existence shows that this is a very profound root which must be respected, not just by the members of the Orthodox faith, but also by all the other individuals originating from this area. If we don’t respect the roots, we would definitely have no future.

And last but not the least, let me thank you for allowing me to meet the people, the young abstinents of your Monastery, which are trying, with your help, to liberate themselves from slavery to the addictions they have fallen into. I will be honest and tell you that even my own close and wider family has certain members affected by this problem, and I firmly believe that there is not a single-family in Macedonia which doesn’t have at least one close or distant relative struggling with some kind of addiction. It seems that you are the only institution in our country which managed to fight successfully and for many years this serious problem and helped many young people to deal with their own demons and come back to society as better persons, thus contributed greatly to their personal and family growth as well as the progress of the entire community.

I would like to tell them, those young people who spend days and months recovering here, that they should be grateful for the existence of such people who can accept them with love and help them. Unfortunately, not state, nor the society and not even their closest ones want to undertake this task, which is very hard and painful. Everyone is minding their own business and letting you fight your problems alone. Therefore, it’s good for you to have an institution like this, which is 1000 years old and these monks filled with knowledge and wisdom and experience gathered around you as second fathers, mothers, second parents. With their noble efforts, you are given a unique chance to get over your problem. I repeat I came here to give my support to this very significant mission because unfortunately, modern addictions consume more and more young people nowadays. And with every day it’s getting harder for them to resist. You are the only ones to bring back the balance and hope that not everything has been lost in the clash with the so-called modern challenges. You prove that it’s not necessary for the young man of today to be a slave of these bad habits, that we can be masters of our lives. Of course, only if we believe profoundly enough in the importance of the spiritual and ethical aspect. And those are the roots which our nation and state are built on “.

In the end, our monastic brotherhood showed once again its gratitude to the respected President for the honour of his visit and the support given as well as his acceptance to be the patron of our jubilee. 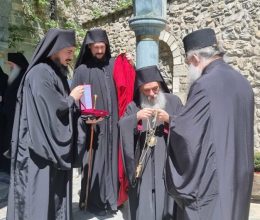 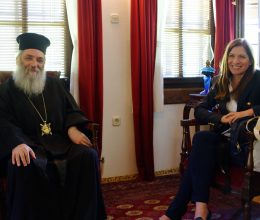 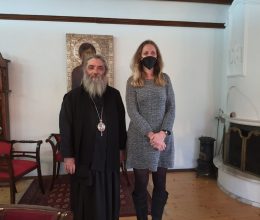 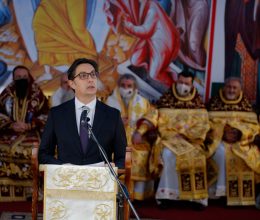 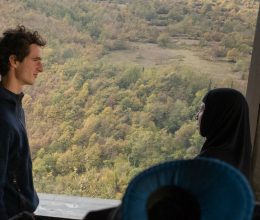