The feast which we have gathered here to celebrate together today is radiant and filled with divine joy. It is rightly called radiant because it shines from the very name of him whom we are honouring today, since he is called the lamp of the light. He is not, of course, a lamp who illumines us with  material light, because then his radiance would not be enduring and constant and would be lost every time some obstacle moved in front of it. But it is light that shows the brilliant radiance of divine grace in the depths of the hearts of those who have gathered to celebrate his memory and who elevate their minds to think upon the sufferings of the righteous man, so that gazing with the eyes of our souls upon his blessed martyrdom, we shall be filled with spiritual joy… This blood adorns the Church more beautifully than any decoration with variegated and rare flowers. It was shed for justice at the end of the era when the old law was in force, and became a flower which stands at the entrance of the presence of Christ.

It is truly a great ceremony that the Church has prepared today for the God-blessed John, who in his numerous spiritual fits, the uncompromising struggle for the Truth and bold martyrdom in His name, was a sight worthy of heaven. Thus the whole universe celebrates him now and glorifies with divinely inspired hymns his blessed repose, which inhabited him in the realm of eternal bliss, as the Gospel says for the righteous: For though they be punished in the sight of men, yet is their hope full of immortality. (Wisdom. 3, 4). It is meet to celebrate this day with prayerful festivity, since this day he made a holiday for us with his martyrdom, with which he sealed the announcement for the future martyrdom of Christ. Been chosen by God to be the Forerunner, he announced with his birth the Nativity of our Saviour, with his baptism preceded the Baptism in the name of Christ, and with his suffering revealed the future Crucifixion of our Lord. His eternal and mighty call for repentance resounds powerfully in the souls of faithful, thus preparing a path for the Lord to descend in the hearts of men.

This call for repentance of the Forerunner keeps constantly alert and ready for struggle the monastic souls too, who following his example, strive to leave the desert of vain life and move into the fruitful desert of voluntary martyrdom for the sake of Christ. Because the Forerunner of Christ is also the forerunner of monastic life. So now, knowing this, should we be surprised at the great love and burning zeal of the brothers and sisters of our holy Monasteries, for the most glorious celebration of the memory of the renowned Bigorski patron saint? One is taken by admiration at the sight of them adorning with solemn dedication the church for the reception of the precious guest from heaven who comes to bestow the Divine grace upon those who prayerfully honour him and celebrate his memory, pleading for his powerful intercession before God. And should we wonder why such a great multitude of faithful came to feast on the Forerunner’s endless treasury of spiritual joy and sweetness? To entrust their tears of repentance, asking him to bring them before our kind Lord so that He could endow us with graceful strength for the apostolic mission to which everyone is called upon.

Today, when the world rushes frantically to its dead-end, when the tempting and immorality and the mundane evil make the Christian cross heavy, his prayerful support strengthens the weak hands and makes bold the hesitant heart.

So when the prayers of all the people present in the richly adorned Bigorski church rose high up in the heavens, combined with the appraisal hymns of the chanters, and met with the powerful prayers of the Baptist, they descended from heavens the inexplicable sweetness of Christ’s grace and joy, which filled everybody with the precious gift of love, joy and peace, and radiated our faces. And with this triumphant gathering, governed, as usual, our most respected bishop, the Metropolitan of Debar and Kichevo Mr. Timothy.

The next morning he headed the Divine festive Liturgy, which he co-celebrated by our Elder, Archimandrite Parthenius, hieromonks from our brotherhood and part of the clergy of our God-protected diocese. The quiet and prayerful joy which filled the hearts of those who as if flows of river kept coming to the Forerunner’s church, was a sufficient testimony for the graceful presence of St. John among us. And our archipastor, the Metropolitan Timothy, didn’t miss to award the souls of all present with his festive sermon about the honour and greatness of the glorious Forerunner. Then the Abbot of the Monastery, Fr. Parthenius, on behalf of all his brothers and sisters, decorated with the honorary medal “the Forerunner” the zealous 82 years old Dragica Andonovska from Bitola, who more than two decades constantly sacrifices herself for the sake of organizing transportation for the numerous believers from Bitola that want to attend the Bigorski feasts and bigger religious holidays.

“Pilgrimages to the holy places”, stated among the other things Fr. Parthenius, „are very useful for the souls of faithful. The visits of pilgrims to our Holy Bigorski Monastery, especially, give us great honour and joy, because as you know, our Monastery is in an area with very little Orthodox people left, and you can say that it’s one of the most distant destinations for the Orthodox Christians in Macedonia. Therefore, every time someone decided to engage himself in the organizing pilgrimage trips to this great sanctuary of ours, we would embraced it with exceptional joy. One of those organizers, who after all, has the longest experience in this matter, is granny Dragica from Bitola. More than 20 years now she is working tirelessly and always manages to bring faithful from Bitola to almost all of the greater holidays. It’s worth mentioning that even in the crisis period of the military conflict in 2001 and afterwards, when things were exceptionally hard and critical in this area because people were afraid to come, she still managed with even greater zeal to visit our Monasteries, bringing pilgrims with her. And not just during the summer season, but in winter as well, when the bus drivers were warned not to make longer trips, especially in this mountain area, granny Dragica boldly gathered pilgrims from Bitola and brought them to all the religious festivities here. For that reason, it gives me great pleasure and honor, in the name of my brothers and sisters, to express to her our deep humble gratitude, manifested in the shape of our greatest decoration, the medal of honour called “The Forerunner”. May it be with her for many years to come and may God give her a lot of spiritual and physical strength so that she could continue her God-pleasing and noble mission“.

The medal of honour was presented to granny Draga by Metropolitan Timothy himself.

The spiritual splendor of the monastery feast continued to glitter even the next day, bringing joy to thousands of visitors with the blessing of the most glorious Baptist of our Lord.

May the Forerunner’s struggle for the Truth and his devotional obedience to Christ the Supreme Leader, be an example for all the Christians, and his holy prayers be with all of us. 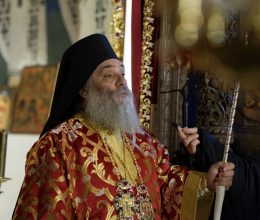 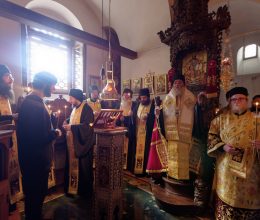 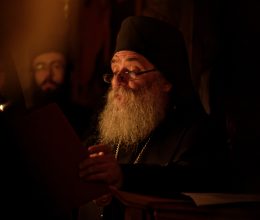 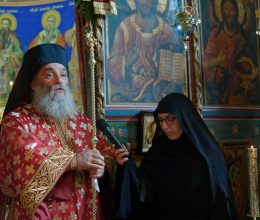