Sermon of His Eminence, Bishop Parthenius, Elder and Abbot of the Bigorski Monastery spoken at the act of Doxology on the Feast of the Holy Prophet Elijah, and the National Holiday, the heroic Ilinden Uprising, on the 2nd of August 2020

May it be on many years to come to the Feast of the Holy Prophet Elijah, and the National Holiday, the heroic Ilinden Uprising, which our ancestors fearlessly raised against the Ottoman Empire, scarifying their lives for freedom.

It seems that there is nothing more precious than freedom. It is the greatest gift of God, the seal of His fatherly love for mankind. Namely, He created the man free. From the very first pages of the Scriptures, we read how God created Adam and Eve as free beings, with the right to choose between the good and the evil. It is an expression of His perfect love – Indeed, love can only be true when it is free.

On my way back to the Monastery, from the famous village of Lazaropole, in my thoughts, I remembered a notable personage from the Old Testament, whom I think it is useful to mention. It is about Joseph, the son of the Patriarch Jacob, whom his brothers out of envy as he was the favourite son of his father, decided to sell him. Firstly, he was thrown into a pit, then sold as a slave, after which he found himself with a courtier of the Pharaoh of Egypt. In the house of the Egyptian, he showed himself to be a particularly pious, honest and industrious boy, so much so that, seeing his qualities; this emperor made him a master of all of his property. But one day, the emperor’s wife, inflamed by an obscene passion, wanted to have with the handsome Joseph, an unclean relationship. The temptation for Joseph was so great that he even went so far as to allow the women to undress him, but at that moment he thought of his God, how good and righteous He is. He believed in the one true God, in whom the Jews believed, and not in the invented Egyptian gods, represented as creatures with human passions and weaknesses, from which heresy arose, ungodly and deviant ways of living which resulted to a moral collapse of the Egyptian society.

Therefore, Joseph, thinking of his God, succeeded to reject his passion, to overcome himself. At that moment, he ran away from the emperor’s wife and left his home. Consequently, the devious mistress, in order to justify herself, accused Joseph in front of her husband, as he allegedly wanted to commit adultery with her. As a result, Joseph suffered greatly. He defeated the sin, but at that moment, he fell into disfavour and was taken to prison. However, the righteous God never forgets His favours but rewards those who live in freedom with Him, fighting to overcome the sin and passions.

After enduring years of unjust imprisonment, God glorified Joseph more than ever. Namely, it happened that the Egyptian King, the Pharaoh, dreamed two strange dreams in a row, which made him very upset. He summoned all Egyptian fortune-tellers and sages and told them about the dreams, but none of them could interpret their meaning. Then his winemaker told him that there was a young Jewish boy in prison, who had the gift from God to tell the meaning of dreams.  The Pharaoh immediately ordered Joseph to be brought out of prison to interpret his dream. This righteous man of God, with the wisdom and enlightenment given to him by God, foretold that the land of Egypt and the whole East will bear seven fruitful years, followed by another seven, extremely dry and unfruitful years. He also advised the Pharaoh to appoint a wise and prudent ruler, who during the seven fruitful years, with good management, would save enough food to feed the Egyptian people during the seven dry years. Admiring the boy’s wisdom and prophecy, he then appointed him as governor of the royal court, right next to him. And Joseph, who despised the suggestion of the wicked and escaped from sin, remaining spiritually free from slavery and captivity, now became the vizier of all Egypt, the second most powerful man in Egypt next to Pharaoh.

The biblical story about Joseph is very beautiful and quite long and I would not like to retell it in details now – whoever wants can read it in the book of Genesis – but I want to highlight one scared story he encountered, as noteworthy teaching. He who abstains from the evil is from God much more rewarded and becomes a benefactor not only for his soul but for the whole nation. So the time came in the years of famine for the eleven brothers who had once sold Joseph as slaves to ask him for wheat so that they could survive. In the end, all Israel was saved through this victim of God, through this great man in the eyes of the Lord, because he overcame himself and defeated the sin. He became victorious and a King, above all, and above himself. That is why he proved to be a true ruler, who brought good to an entire nation.

This is something good that the monks should know. If we want to overcome ourselves, it is necessary to reject all proposals, which might arise to us from the world.  When the ancient philosophers came to the conclusion that the man should get to know himself first, then how much more should that apply to us, the monks?! In ancient times, in the time before Christ, people did not try hard enough to know themselves. The life ideology was – succumb on the satisfaction of their passions, in other words, they lived like animals. Rare were those who rose to higher philosophical ladders and came to the realization that man should know himself. Later, the fathers of our Church supplemented that philosophical phrase and added: know yourself and overcome yourself. Indeed, there is nothing greater than that, once you get to know yourself – your weaknesses and passions, it helps to win yourself and become truly free, because Christianity is a faith of freedom.

Today we remembered the holy story about Joseph. He was also one righteous of the Old Testament as Elijah, who protected the people from evil teachings, such as the beliefs of the Egyptians, Hellenes, Babylonians, Persians, etc. At that time, only Jews had the right faith in God. And, we mention these holy and bright personage, to remind ourselves how important it is for a person to escape from the sin and fight against its passions.

The Lord said in the Holy Gospel that – “ No man can serve two masters: for either he will hate the one, and love the other: or else he will hold to the one and despise the other. Ye cannot serve God and mammon” (Matthew 6: 24).

The only passion taking a personified form in the Gospel and is compared to God, because it can completely cast God out of the human heart, is the love of money, and wealth. This is the most terrible passion! Imagine for a second, what could happen if someone, with the passion of avarice as his greatest weakness, is entrusted with a high position, or to rule a nation. The whole nation could suffer because of him.  Saint John Chrysostom says that we should not condemn those who are placed at high positions in the society nor those who are chosen to lead. Instead, we should have mercy and pray for them, as their responsibility is considerable. Let us pray that they would do the same as the wonderful Joseph, who, in the time of temptation and weakness, turned his thoughts to God in prayer and shunned the sin. This is why God appointed him as ruler, to show us that only the one who succeeded to overcome his own weaknesses can truly please God.

After all, we are all obliged to flee from sin, hence to remain in the freedom with which Christ has set us free. We have already said that there is nothing more precious than freedom. We just sang our country’s two anthems: “Rise-up dayspring of the freedom” – The March of the Macedonian Revolutionaries and “Today over Macedonia”.  In both hymns, already at the beginning, freedom is mentioned, as the supreme ideal. Many of our ancestors fell for this ideal and today we remember all these victims, and all the love they had for their motherland. If we live freely, and we rejoice to live in this country today, it is thanks to these brave men who shed their blood for our freedom.

We all must live as true Christians, not just in name. And it is wrong constantly to blame the elected individuals of our government and those with a leading position for the bad situation of our society. It is not only their fault, but we are also all guilty. Just as we personally do not run away from the sin, but instead, we give ourselves to it, so do they. Actually, as much someone is on a higher position, the more his misery becomes apparent and the damage he causes to the environment is far greater. If for example, someone with a particular sin ends up occupying a ruling position in society, that will end up destroying himself and many of his subordinates and, in some cases, entire nations.

You could say that today’s prophets are the monks. Therefore, I ask you, to be careful what you do with your life. I want you to imitate Saint Elijah, Saint Joseph and the other Holy Prophets. I know it is hard to abstain ourselves, but we have to do it because of the souls that God has entrusted us. We must fight to the end. And struggle means sacrifice. Let us sacrifice ourselves for the smallest, the insignificant, the forgotten, for everyone. The Saint Apostle James says: “The effectual fervent prayer of a righteous man availeth much. Elias was a man subject to like passions as we are, and he prayed earnestly that it might not rain: and it rained not on the earth by the space of three years and six months” (James 5: 16-17). We are not righteous, but we are very sinful, but when we strive to please God with all of our heart, He hears our prayers. So, let’s strive to love everyone so that we can justify ourselves and be forgiven.

May the Feast of the Holy Prophet Elijah, as well as the National Holiday, be on many years to come, and may God protects our Church and Homeland!

May you be alive and in good health! 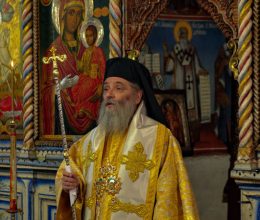 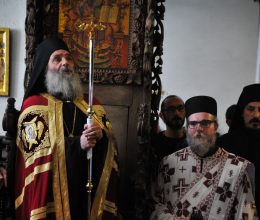 Stand in the freedom, which Christ set us free with 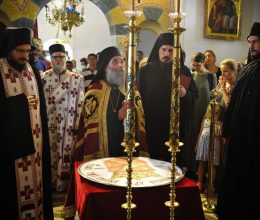 The feast of St. Elijah 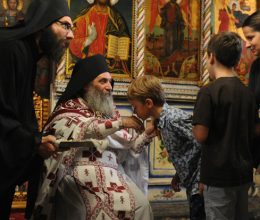 In honour of the great Prophet Elijah