Sermon of His Beatitude, Archimandrite Parthenius, uttered on the Vespers celebration of St. Parthenius of Lampsacus

Iam truly touched, and I do not know which words to use. From the bottom of my heart I thank you for the great love, which I can feel from all of you. But I find myself totally unworthy of it, and I consider myself as the unjust servant described in the Holy Gospel, by the mouth of our Savior, Christ.

Standing before God, I have nothing to present and justify myself with. My zeal is week and I am lacking in love. But despite all that, I strive as much as I could, to share with everyone who will ask or has a need, all the spiritual treasure that God has given me so generously. Ever since the very first moment when our good Lord entrusted to me, the unworthy, this Monastery as a dwelling, I tried, by the help of His grace, to make it a home for everyone. So that everyone could feel in it as a child of our heavenly Father. And time has shown that many of those who have been welcomed at this Monastery as if in the home of our Father, have changed, accepted a life of repentance and have become good Christians. This gives me hope for my salvation, but also motivates me to keep struggling to improve myself, for the sake of your love and sacrifice, supported by your prayers. I humbly ask all of you to forgive my weaknesses, passions and falls. If I have hurt any of you, I want you to forgive me and pray for me, the unworthy.

Bearing the burden of being the first among the monks, their Abbot – the word “Abbot” itself means a leader – I see now just how heavy the cross is of the one who is responsible for the souls of God’s children, those who are so loved by Christ and dearly paid for with His Divine Blood. To be entrusted to you, to guide them towards Him and lead them to His Kingdom! A truly huge, terrible responsibility. Therefore, I humbly ask you to constantly remember me in your prayers.

I thank my beloved brothers – monks and sisters – nuns that they remembered to present me with this beautifully painted portrait from the man who engraved Christ in my heart, mostly through his live testimony of God’s love. The man, who testified with his deeds that, as the Apostle Paul says, in Christ “There is neither Jew nor Greek, there is neither bond nor free, there is neither male nor female (Gal. 3,28).

I happened to leave for Mount Athos in a period when our country was in the process of becoming independent and, I’m sure the elderly people here remember this, the political situation was so complicated and uncertain, that we did not know whether we will survive as a country, whether there will be a war, etc. The relations with the Greek state were particularly complicated. These days, memories of that time came to my mind, and I was telling some of my brothers, that during the sixth month of my stay there, those of us who were from here faced some serious problems caused by the Greek government on Mount Athos. In those days the Elder was not at the Monastery, he was on a trip to Athens. They invited us, therefore, to a conversation during which we were to supposed to declare what nationality we are. Father George, known for his big heart and spiritual generosity, called us Slavic-Macedonians – a name which was not acceptable at all for the wider Greek world. So I said that I am a Slavic-Macedonian. However, my answer was not pleasing to them. Then one of the older monks who were around said that we could choose any of the surrounding neighboring nations and given that we were until recently a part of Yugoslavia, because of the friendship of Greece with Serbia, it would be most appropriate to declare myself as a Serb. Then I answered decisively: “In no way would I do it, because I think I do not have to be a Serb to be Orthodox.” They considered that a problem, so they tried to somehow get in touch with the Elder. At that time, it was not easy to get in touch with a man that far away, as it is now with the mobile phones, but being persistent, they managed to get him on the phone and ask him what should be done.  He replied: “Let them declare themselves as they feel. And I will settle things with the secular authorities. ” Later, the monks told me that Father George called the people of the Government and told them, “If we keep on treating our Orthodox brothers in this way, we will be punished by God, and our blessing will be taken away. The Lord, gave us, the Greeks, the blessing to preserve the Orthodox heritage and tradition, at a time when all the other Orthodox nations and states have fallen into communism. You know, it’s a great blessing. And now, God has sent these people for us to give them the tradition so that they could bring it back to their countries. Who are we to stop God’s providence?”

The Lord has always chosen holy men to convey the message of the Gospel in a worthy way. Such a man was, undoubtedly, the ever-mentioned Elder George Kapsanis, very similar, by spirit, to the great Photius, the Holy Ecumenical Patriarch, who, inspired by his progressive evangelical conscience, had sent the Holy Brothers Cyril and Methodius on a mission among our ancestors, to announce the Gospel of Christ. The enlightening grace of God has always been powerful in the Church, and it is still active today. Even in these most recent times, our Lord keeps on choosing enlightened persons for the governing places in the Church, who are aware of their responsibility and strive to act as their glorious predecessors, in the realization of God’s providence for the salvation of all people. Nowadays, we see how the primate among the leaders, the Ecumenical Patriarch is firmly determined to establish a proper order in the Orthodoxy, on the foundation of the sacred Canons and the Customary Law, in order to heal the wounds and divisions in the one body of Christ. Let us pray that God grant him and to all the other leaders of the local Churches the strength and enlightenment to act according to Christ’s compassion and empathy.

I, being a spiritual father, although the very least of them, always make sure to be sympathetic with everyone who wants to open his inner wounds to me. When I see that there is even a slightest feeling of remorse in the one who is taking a confession, I don’t impose immediately some strict rules upon him, because I know that the weight of the rules will only additionally burden his already tormented soul, and it can have the  opposite effect, he might never want to come to the Church again. That is why I try to act according to blessed spiritual empathy, as the ecclesiastic Fathers have taught us. We cannot expect from people to preserve any formal righteousness at the very first confession and to impose upon them the strictness of the rules. Having in mind just how hard it is for them to open their wounds at the first confession, it’s enough that one has decided to confess, and therefore it is ok just to accept his or her repentance, to comfort and advise. In these cases, I act indulgently, I would hear what he wants and can tell me, teach him about repentance, and then I will read him a prayer. And so, after the second, third, fourth confession, we see the desired results.

I am saying this mainly because nowadays I hear that some bishops constantly talk about some great, abstract repentance that should be shown by those who, in most cases, not by their own fault, are in schism. However, the history of the Church has shown us something completely different – it testifies namely that holy men with great love and indulgence accepted those who wanted to return to the Church, they have left for whatever reason. Anyway, these holy men had for their prototype Christ Himself, Who did not ask Zacchaeus for some “legal” repentance, but only noticed his desire, called to him and went to his home. We see a similar example in the Gospel with the prodigal woman, who was accepted by Christ because of her love and sincere wish; then, with the prodigal son, who was met by his merciful father even before he managed to reach his father’s house, etc.

I particularly ask you to pray for the overcoming of temptations and divisions in the Church that we witness every day, so that all of us in the Church could be as one. Because it’s Christ’s will is that we should be as one in God Trinity: That they all may be one; as thou, Father, art in me, and I in thee, that they also may be one in us: that the world may believe that thou hast sent me (John 17,21).  And we will be as one, only through His love. The greatest testimony that we are Christians is our love: By this shall all men know that ye are my disciples, if ye have love one to another (John 13,35).  And today’s assembly is sealed with that very love of Christ. If it wasn’t for it, we would surely not have gathered like this today, united as if one family, to be joy to one another. This gathering is a mutual joy, because the meeting with the loved ones is the most beautiful thing. Tonight, after a long time I saw many of my spiritual children. When I saw them from afar, I would spread my hands, I would hug them, and I was very happy because I really love them. These are not just empty words but are drawn from the inner sanctuary of the heart.

Finally, I would like to ask you once again to pray for me, because I really rely on your prayers. Just as the Lord has pardoned the unjust servant, so do I hope that for your sake He will have mercy upon me and will give me the strength to be a better spiritual father and a pastor.

May you all be in good health and be blessed by God! Thank you for your love and your care. Let the prayers of St. Parthenius of Lampsacus be with all of us! 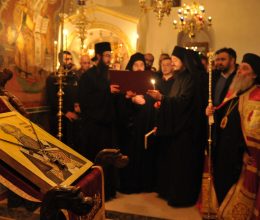 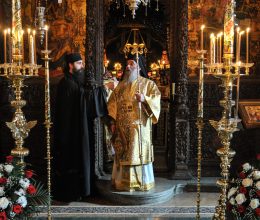