A homily by His Grace Bishop Partenij of Antania, Abbot of the Holy Monastery of Bigorski, given on the Sunday of the Parable of Lazarus the Poor Man, on the 7th of November in the Year of Our Lord 2022.

We just heard a parable from the Gospels that most of you are familiar with, about the rich man and Lazarus the poor man. The Savior’s pure and divine lips do not give any name to the rich man, dressed in porphyry and silk and living a life of luxury and splendor. On the other hand, He does give a name to the poor man, who lived near the rich man’s house and wanted to eat the rich man’s crumbs. That name was Lazarus, which translates as “God has helped.”

It is a very powerful and touching story indeed. The Lord Christ uses this parable to teach us about the eschaton, about the end of the lives of two people. Eschatology is the study of the end of the world, which in Christianity is when the Son of God will return to Earth to judge everyone, but also the end of our individual lives and what follows after that. The first thing we notice in this parable is that what seems like an end to us is actually a beginning for God. After a brief introduction to the earthly lives of the rich man and Lazarus, the main part of the parable actually begins with their end. The beginning of the parable’s important events and the meaning of the two men’s lives takes place after what would normally be the end. Thus we see two states of eternal being. The rich man, alas, finds himself in unbearable torment. He is ontologically dead. He has fallen into nothingness since the One Who knows everything and Who cannot forget anything has forgotten him. Rather, it would be more proper to say that this man erased his own name from the Book of Life through his way of life. And here he is now, in a state of hellish oblivion and tortures. It is from such a state that he suddenly turns his gaze to Heaven and there he sees Lazarus, the one whom he did not even notice during his earthly life as existing and suffering right next to him. We see a complete inversion of circumstances: the pitiless and callous man who never gave alms, now begs for mercy. In the torments of hell, he lifted up his eyes and saw Abraham afar off and Lazarus at his side, and cried out: “And being in torments in Hades, he lifted up his eyes and saw Abraham afar off, and Lazarus in his bosom. Then he cried and said, ‘Father Abraham, have mercy on me, and send Lazarus that he may dip the tip of his finger in water and cool my tongue, for I am tormented in this flame.” (Luke 16:23-24)

It would be both unfair and incorrect to say that this man fell into the place of perdition because he was rich, or that Lazarus was raised to the place of blessedness only because he was poor. No. Wealth in itself is not a sin. In this parable, we see our forefather Abraham in heaven. He is all of our father in faith, and during his earthly life, he was a particularly rich man, perhaps the richest on Earth. The same goes for poverty: simply being poor does not equal justice. The gravity of things depends on the way we use them and with what intentions. The rich man in the story used the wealth that God gave him only for his personal pleasures and passions. He did not want to share anything that was “his” with this man who was in dire need. He had so many opportunities to do great good, yet he did not do a single thing. He simply ignored his neighbor right next to him and did not even notice his existence, even though he was so close to him, right in front of his house. He passed him by daily with total insensitivity. And he didn’t even begin to think about compassion! He had so many opportunities to open the gates of Heaven for himself through mercy, but he didn’t take any of them.

Essentially, a truly rich person is someone who knows how to share with others, who has a sympathetic heart that is filled with compassion and love. When a truly rich person eats, he remembers the hungry and is happy when others are fed through him. He rejoices when he can clothe someone who has nothing to wear. He will be satisfied when he can give consolation to those in sorrow. Wealth is not just a material thing. After all, much greater, permanent, and true wealth consists of a person’s spiritual qualities: kindness, joy, patience, and compassion. With these things, a person is rich in the Lord and opens the door to the Kingdom of Heaven.

Spiritual wealth also includes self-control, which, in turn, paves the way for other virtues. Among other things, it curbs man’s egoism. Rich people, and really everyone, have a great opportunity to do many good things, but of course, they will not do it if they are filled with self-love, if they given over completely to satisfying their senses. Some Fathers understand the five brothers in the rich man’s house to be a symbol for the five human senses. Thus, in this case, the rich man completely indulged in sensual pleasures and enjoyment, while forgetting about other people. Thus, the wealth entrusted to him for his own good, and more so for the good of his fellow men, he misused to his own detriment. In contrast to him, Lazarus used poverty as a blessing, without complaining or getting angry, and therefore he was finally blessed with an eternal blessing. In speaking of his death, Christ says: “The beggar died, and was carried by the angels to Abraham’s bosom” (Luke 16:22). While, on the other hand, he says that the rich man just died and was buried. Instead of angels, his soul was seized by unclean spirits, to whom he had surrendered himself with his selfishness.

We heard a seemingly simple story, but now we see how much depth it really has. It would be good if we come away from it understanding that the different things and situations in our lives should be used properly, so as to gain God’s blessing through them. The wealth that God gives us is so that it will become a blessing by sharing it with those who need it. But at the same time, the poverty and difficult situations in which we sometimes find ourselves are meant to be used for spiritual benefit. They are meant to teach us to endure with patience and gratitude, so that God becomes our helper. And in no wise should we become trapped in our own selfishness, but rather we must fight against egoism and avarice as our greatest enemies. It is now that we determine what state our soul will be in after our physical death. Unfortunately, people today live in terrible selfishness. How many people in the world are like the rich man described in the parable? If people do not know how to share with others, their wealth will become their own hell. They accumulate money and wealth but then the end comes. The memory of the one who does not live for God perishes. People who focused only on this temporal life without thinking about the life to come will perish. In contrast to them, people who constantly remember God and read the Holy Gospel are filled and nourished by the word of God and will acquire blessings for their souls and for those around them, and even for the whole world.

Thus, my beloved, let us remember our end and our supreme purpose. This does not mean we should fear the end, but rather we should prepare for it, because it is essentially a new beginning. Let us strive to show ourselves worthy of our call to be the children of God. God is not the creator of hell, but we have created that place of darkness ourselves. We, as children of God, should love the One who created us for life and that we might have it abundantly (cf. John 10:10), not for suffering. Good children do their Father’s will not out of fear of suffering, but out of love for Him, because He first loved them and gave Himself for them. The Lord Christ came and crucified himself, to save His scattered children. He became our Lazarus, the One Who remembered us. We see how when the rich man asked for help in the parable, he asked our forefather Abraham to send Lazarus to his father’s house, to tell his brothers about the terrible fate of merciless souls, because apparently, they would only repent if someone rose from the dead to tell them. When he says this he even seems to be blaming God for not sending a dead man into his life to tell him that there is life after death. The same thing is happening to this day, all around us. Christ came, vanquished death, and rose again. He is our Lazarus, sent by God to tell us about eternal life. But instead of rising above the passions that deceive them and drag them to the grave, and considering eternity, people only repeat: “Well, who actually saw what happened? Who has come back to tell us about it?” The tragic thing is that we often hear these shallow words from people who go to Church, are baptized, see the Crucified One, and celebrate Pascha. It is no coincidence that the greatest holiday we celebrate is the Resurrection of Christ, the victory over death. How can someone ask after all that: who saw it, who came back from there?! The true faithful not only see Him, the Risen One, but also see and talk to all His faithful followers – the saints, the martyrs, the spirits of their ancestors, who many times, sent by God, call us and communicate messages to us, either in a dream, or in public, or through an event. God always sends them from that world and gives us signs that we should live in a way pleasing to God and spend our short lives properly, using all the gifts that He gives us so that we too can live one day in eternal blessedness and joy together with Lazarus and Abraham and with all the saints. May we enjoy the inexpressible beauty of seeing God’s face, which cannot be compared to anything in this world. 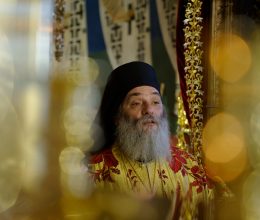 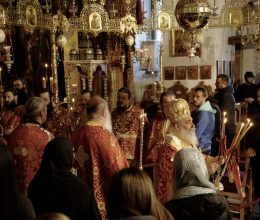 Feast of St. Longinus the Centurion in Bigorski