A sermon by His Eminence, Archimandrite Parthenius, delivered on the Sunday of Myrrh-bearing Women at the monastic Refectory in Rajcica.

“Be not affrighted: Ye seek Jesus of Nazareth, which was crucified: he has risen; he is not here: behold the place where they laid him. But go your way, tell his disciples and Peter that he goeth before you into Galilee: there shall ye see him, as he said unto you.” (Mark 16:6‭-‬7)

My beloved ones, my heart is now truly filled with gratitude to God Who, by His miraculous providence, brought me today to this Holy Monastery, dedicated to the great and renowned Wonderworker, St. George the Great Martyr – which is also the first Convent of our monastic community. I can freely say that this Monastery is the home of the brave Myrrh-bearing women. Because the nuns are really Myrrh-bearing women. This was confirmed throughout the whole Christian history, and it is so even at present. But in this context I would add that the title Christ’s myrrh-bearers refers not only to nuns but also to all women who have indulged themselves in a blessed Christian marriage, choosing the struggle to raise a family and build a healthy Christian society.

During the Holy Liturgy today, we heard the Gospel of Apostle Mark regarding the Resurrection of our Saviour, the Lord Jesus Christ. We came to know that the first to reach the Tomb with Jesus’ body and who were honoured to hear the good tidings of the Resurrection, were not the Apostles, but the Myrrh-bearing women.

What really brought these women to the Tomb? You know, at that time, almost all Jews were taken by a wrong conception, I would say, a secular perception of ​​the Messiah Christ, which completely diminished His spiritual dimension. They believed that He would be a secular Jewish king who would liberate them from bondage to different empires – including the most powerful one at that time, the Roman Empire – and that he would rule the world. The prophecies for Jesus Christ said that He would truly be a King, but a spiritual one, whose Kingdom would be eternal. Still, few were those who understood this revelation of God. It was the same with these Myrrh-bearing women, we heard about today. They too were not spared from a similar false messianic perception, which, naturally, had a profound effect on them. Just like the Apostles, it is doubtful whether they believed in the Resurrection of Christ at all? Most probably not that much since they brought scents to the Tomb to anoint the dead body of their beloved Teacher. This being so, we should ask ourselves, what really brought them to the Tomb of our Lord at a time when even mentioning the name of Jesus was life-threatening for everyone?  It was the huge respect they carried in their female hearts for the beloved Teacher, their tenderness, their gentleness, their devotion to Him, their compassion. Attributes that God assigned to all women, thus bringing through them the warmth to the world. These characteristics brought the women to the Tomb of Christ. Although their hope in the Resurrection was weak, their reverence for their Teacher, their tenderness, their great love, and compassion, made them ignore all the dangers and go to the sealed Tomb with the inclination to anoint His body. Such devotion made them worthy of being the first heralds of the Resurrection. Do you see how the Lord appreciates ​​and rewards compassion? He rewarded these women with the honour of hearing the Angel say to them: Be not affrighted: Ye seek Jesus of Nazareth, which was crucified: he has risen; he is not here: behold the place where they laid him. But go your way, tell his disciples and Peter – Peter was deliberately mentioned because he had renounced Christ three times before, so in this way, hearing about the Resurrection he wouldn’t go into despair – that he goeth before you into Galilee: there shall ye see him, as he said unto you. (Mark 16:6-7) At that moment,  upon hearing the most beautiful tidings, they went down in human history, and through them, all women were honoured with that sublime apostolic role and honour!

This event reminds me of the Life of the Venerable Kassia the Songwriter.  Namely, when the young Byzantine Emperor Theophilus was about to choose his future fiancée from the Constantinople’s nobility, he started testing the ladies brought to him. He approached St. Kassia who was especially beautiful and educated, and said: “Through a woman [came forth] the baser [things]”, St. Kassia promptly responded by saying: “And through a woman [came forth] the better [things]”, referring to the Most Holy Mother of God. Simply, God demonstrated and proved what great honour and dignity He has bestowed upon women!  He chose them to be the first evangelists of His Resurrection!

I would like to refer again to this Monastery and to you, my beloved nuns. It is an especial honour for me to be with you today, my Myrrh-bearers because with your everyday feat you have testified many times and keep on bearing witness to the joy of the Risen Christ, the true meaning of our lives. Wearing this black cassock and living here in the feat of repentance, you constantly share the privilege of the Myrrh-bearing women, the first evangelists of Christ’s Resurrection. So, rejoice! See how great God’s love is!

In the pre-Christian era, women were not appreciated at all. But the Merciful One restored their respect even during His earthly life, and honoured women to be His disciples and followers. That was something totally unthinkable for any teacher or national leader before Him. In fact, until then, women were not allowed to be disciples to a teacher, nor to preach in public. In other words, they were considered as something less than a human being. But after Christ’s resurrection, women not only gained their full human dignity but also became powerful preachers, such as Mary Magdalene, who had previously been a sinner. Christ despised no one. Let us only recall the evangelical adulterous woman, who, according to Jewish law, was supposed to be stoned. He showed her mercy and saved her. Also, let us think of the woman who was courageous enough to enter the house of Simon the Leper and to anoint the feet of the Lord. The fact that Christ visited the home of a leper, which was completely forbidden for anyone to enter, gave her the courage to follow Him, anoint His feet with myrrh and wipe them with her own hair. The Lord vindicated her too… In conclusion, He demonstrated to us that women are worthy to be the greatest preachers, to be disciples of His Revelation.

Therefore, be strong and rejoice, my sisters! Both you who are in a monastic feat, and also you who are married, or are yet to enter the sacred Mystery between a man and a woman. In fact, you all need to be like the Myrrh-bearing women in your souls and to be courageous. It is not a coincidence that the Lord first addressed the women. He had in mind their maternal dignity. And you are bearers of that dignity, the nuns as spiritual, and the others as biological mothers. The significance of the maternal role is evident in the fact that the first word the new-born baby utters is ‘mom’. The mother is the one who can teach the child about real life, about God. But only if she is with Christ.  And if she is not with Him, then what could she teach him?

That is why you, the nuns, being the spiritual mothers, should serve as examples to the biological mothers regarding the faith, so that they could also have you as examples of maternal love, because spiritual motherhood comes first, just as spiritual fatherhood is first and above all. Undoubtedly, spiritual kinship is above the blood relation. God took you from the world and placed you here to strive earnestly and vigorously in the feat of motherly love, as witnesses of the Resurrection. Because the Tomb of Christ, mysteriously emanates the light of the Resurrection, inviting us all: “Go and tell everyone that Christ is risen!” These words addressed first to the Myrrh-bearing women two thousand years ago, now reach all of us. We are all invited to assume the role of the Myrrh-bearing women. It is the woman’s heart that first saw and first believed in the Resurrection. Men needed to run to the Tomb to see, and then to believe. When the apostles’ Peter and John, heard the good tidings from the Myrrh-bearing women, they ran to the Tomb to see for themselves. Fear and doubt were present in them. Such is the male heart. And then – they became convinced and strong in faith.

Be thankful, my beloved nuns, for being among those chosen by God, to pray for the whole world, for everyone, and for everything. You now live in a place that once looked like a material cemetery. Although the church was still here, there was just a half-ruined barn in the place where we are currently standing. Some of you remember how it was here. And now, this place has grown into a beautiful monastery that testifies the Resurrection, above all through you, the nuns, as the Myrrh-bearing women, who just like them testify that the Tomb is no longer a grave, but a source of life. So this monastery, which was once a dead monument in disintegration, is brought to life again because you have heard the voice of the One who mysteriously summoned you.

Forgive me and pray for me, both you, spiritual mothers – the nuns, and you, biological parents, who in any case should strive for spiritual motherhood. I wish you all the blessing of the Lord!  And, of course, to those who have yet to start a family. May you be alive and well and blessed by God! 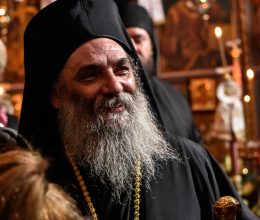 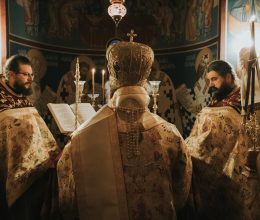 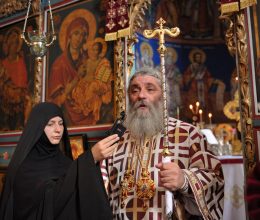 The cross is a symbol of pain, but also of resurrection and joy! 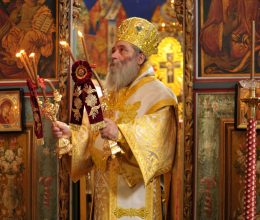 The Two Spiritual States of Man