O the depth of the riches both of the wisdom and knowledge of God! how unsearchable are his judgments, and his ways past finding out!

The wise God Who knows ahead the outcome of every deed and Whose eyes perceive even the smallest detail so nothing could be hidden from Him, revealed to us once again His Premeditation and care for the sacred objects. Namely, yesterday our monastery was visited by the two noble brothers Zharko and Zlatko Shurdoski, with origins from village Lozhani, Struga, and upon arriving they asked for a meeting with our Elder, Archimandrite Parthenius, in order to hand him over some things. At the meeting they told the Elder that they have something which belongs to the Church. Actually, these to religious brothers gave Fr. Parthenius the silver reliquary with relics of St. Paraskevi as well as three silver Holy Table crosses, which were stolen from the Prechista Monastery of the Mother of God, near Kichevo, on 11th December 2014. These holy objects came to the brothers according to Divine Providence. In fact the thief, who was caught by the police the very next day, running from the law, and anxious to get rid of the incriminating evidence of his theft, had thrown the rucksack with the relics into the river. Later a person, who came to catch fish saw the rucksack and took it out of the water. When he realized that what he held were precious sacred objects and relics, he decided to take and shelter them in his home. But again the Divine Providence arranged that he would give these things to the two brothers who nobly helped his poor family with finances. As soon as the reliquary and the crosses were in the hands of the Shurdoski brothers, they hastened to the Bigorski Monastery to give them to our Elder and Abbot, being familiar with his care for the Christian relics. An additional motivation for this noble deed of the brothers was the fact that a few years ago, Zharko, who resides and works in the USA, had a terrible car accident, but by the miracle of St. Paraskevi, whose icon he always carried with himself, he didn’t suffer any injury what so ever. Out of gratitude to this Saint he has now returned her relics to the Church, for veneration of faithful, and as a moral for infidels.

May the Generous God reward the Shurdoski brothers with heavenly prize for this noble and God-loving deed of theirs!

The reliquary and the crosses would be returned to the Prechista Monastery of the Divine Mother, and in due time, with God’s help, restored.

Glory to our Lord for everything! 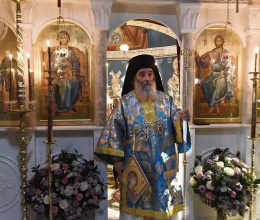 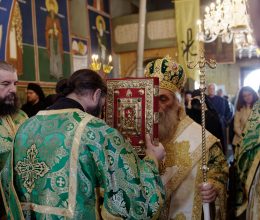 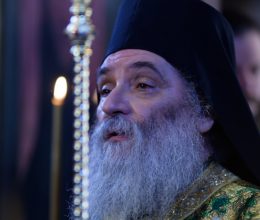 Saint Paraskevi as an image of hope and joy 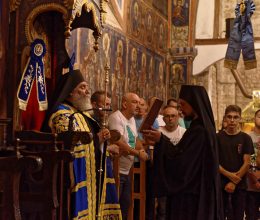