A fire, which broke out in northern Israel, threatens the Basilica of the Transfiguration, a Christian holy place. The monks were evacuated from the area of the fire the previous night, according to the firefighting department.

The fire, which broke out in a forest near Mount Tabor, at the top of which the basilica is located. The police reported that the fire was not caused by arson.

Firefighters have been trying yesterday afternoon to bring fire under control, which is not very far away from the basilica,” said the firefighting department.

“Dozens of firefighters tackled the fire there,” it added in a statement. However, the cause of the fire was not specified.

Hundreds of thousands of believers visit the church every year, according to the Custody of the Holy Land.

Twelve monks were evacuated from the area of the fire at night.

The Custody of the Holy Land, which manages the basilica, accused the Israeli authorities of “negligence”.

“Christian churches have warned the authorities for many years, and have called for the supply of water at the top of the mountain, as the law stipulates,” said the Custody in its statement. 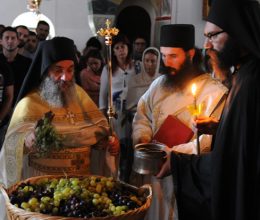 The light of Mount Tabor shone in the hearts of faithful

In the midst of desert beauty