It is time the West offered robust support to the Istanbul-based Patriarchate – now being squeezed by Ankara and Moscow, both of which see it as a threat to their illiberal projects.

The Ecumenical Patriarch and Archbishop of Constantinople, Bartholomew I, is the spiritual leader of some 300 million Orthodox Christians. He is “first among equals” among the prelates of all the self-governing Eastern Orthodox churches in the world.

Yet, thanks to Vladimir Putin’s instrumentalization of the Russian Orthodox Church to advance his geopolitical ambitions, the Istanbul-based Ecumenical Patriarchate increasingly finds itself in the crosshairs of the Kremlin.

As the Russian Church has by far the largest Orthodox community in the world, and most Orthodox Christians live in former Iron Curtain countries, Bartholomew finds himself an unwitting competitor with the Russian government.

What is more difficult to understand is why Recep Tayyip Erdogan, President of NATO-member Turkey, sees it in his interest to join Putin’s pressure on the Ecumenical Patriarchate.

However, a closer look shows that Putin and Erdogan both see the Ecumenical Patriarchate as an extension of Western influence that threatens their respective political ambitions.

Ukraine as catalyst of Moscow’s fury

On January 5, 2019, Bartholomew I signed a tomos (decree) granting autocephaly, or ecclesial independence, to the Orthodox Church in Ukraine, which fell under the Moscow Patriarchate’s jurisdiction in 1686.

The Ukrainian Church’s desire for spiritual independence mirrors the Kyiv government’s own attempt to escape from Moscow’s orbit, to which Putin responded by launching an invasion and proxy war that has claimed some 13,000 lives and forced 1.5 million Ukrainians from their homes.

The Russian state and Church do not agree on everything – the regime’s valorization of “Soviet achievements” under Stalin being one example. But they have forged a sort of ideological marriage of convenience. While Russia’s government champions “traditional values” – e.g., opposition to LGBTI groups and feminism – the Church supports Russia’s geopolitical ambitions. One pillar of this philosophical merger is the 15th-century concept of Moscow as the “Third Rome,” meaning that after the fall of Constantinople to the Ottomans in 1453, Moscow became its spiritual and indeed political successor.

The notion of Moscow as a Third Rome complements a more important concept in Russian foreign policy: derzhavnost, or “great power status;” in other words, recognition that Russia commands respect in world affairs. Russia’s identity as an “Orthodox power” is kept backstage, but it steps into the limelight when geopolitical aspirations and Church interests converge, such as in Ukraine.

Bartholomew I’s grant of autocephaly to the Ukrainian Church ensured such a convergence. It reinforced Kyiv’s bid for political independence, while depriving the Russian Orthodox Church of one-third of the Moscow Patriarchate’s parishes, over 12,000 in total, which are in Ukraine. Both institutions felt they needed to act.

In the lead-up to Bartholomew I’s decision, Russian hackers dubbed “Fancy Bear” began targeting Bartholomew and his top aides. The group had already attacked the Democratic Party in the United States as well as US intelligence personnel. In October 2018, US prosecutors charged Russian military intelligence officials with using “Fancy Bear” as a front for their own criminal activities.

As part of a disinformation campaign, Moscow also propagated conspiracies surrounding Bartholomew I’s motives. Russian-language journalists alleged that the Ecumenical Patriarch was a proxy for American and NATO interests. This year, Russian Foreign Minister Sergey Lavrov added fuel to the fire, telling the media that Bartholomew I’s mission, “apparently prepared by the Americans … is to bury the influence of Orthodoxy in the modern world”.

Why Erdogan is joining Russia’s campaign

While Ukraine’s geopolitical importance in Moscow’s eyes is clear, it is puzzling to see pro-government media in NATO-member Turkey echoing the Russian government’s disinformation campaign to undermine the Ecumenical Patriarch.

Ankara has much to gain in terms of “soft power” from the Ecumenical Patriarchate’s presence on Turkish soil and from Bartholomew I’s rising global standing. However, just as Putin professes spiritual pretensions of Moscow as an Orthodox power, Erdogan sees Turkey as a Sunni Muslim power – and both view Bartholomew I as an extension of Western influence and thus a threat to their respective illiberal projects. As a result, Moscow’s and Ankara’s attempts to subvert the Ecumenical Patriarchate include disinformation, conspiracies and hacking.

The Russian and Turkish disinformation campaigns amplify one another. One month after Turkey’s July 2016 failed coup attempt, Erdogan’s mouthpiece, the daily Aksam published a piece accusing the CIA, Fethullah Gulen, the US-based Turkish cleric who Ankara accuses of masterminding the coup, and Bartholomew I, of plotting to oust Erdogan. They claimed the reason for this was Turkey’s recent rapprochement with Russia.

Aksam’s evidence was an article published in the Moscow-based, pro-Kremlin Oriental Review, which in turn cited a former US ambassador’s fake letter as proof. To an outsider, the allegations are ridiculous; why would the spiritual leader of Orthodox Christianity work with the CIA and Islamists to overthrow Erdogan?

Such conspiracies, however, have traction in Turkey, as evidenced by a piece last year in Gercek Hayat, a magazine published by an Erdogan crony, which portrayed Bartholomew as a member of a clandestine terrorist network involving Gulen, the CIA, Britain’s MI6, Israel’s Mossad, and freemasons.

To many Turks, such articles are convincing, as the “threats” from Bartholomew I and foreign intelligence agencies slip logically into deep, historic currents of discourse that flow just below the surface of religious and minority politics in the country.

Conspiracies surrounding Christian minorities acting as a “fifth column” unite Turks across the political spectrum, including many who are secular. It is a widely-held belief that Christian missionaries ­– many of whom were American at the turn of the century – instigated the collapse of the Ottoman Empire. Turkey’s religious minorities became targets of similar accusations in the aftermath of the 2016 coup attempt. A North Carolina pastor, Andrew Brunson, became the public face of such conspiratorial thinking and spent two years in a Turkish prison on false charges of coup plotting, military espionage, and terrorism.

The presence of the Ecumenical Patriarch in Istanbul is also an uncomfortable relic of Turkey’s multi-religious past, and therefore, a subject for repression. A state-orchestrated pogrom targeting Istanbul’s Greek Orthodox minority in 1955 continues to embarrass Turkey, which has yet to face its problematic past. Nine years later, amid escalating tensions in Cyprus, Turkey deported tens of thousands of Istanbul’s remaining Greek nationals, further decimating the community. In 1971, the Turkish government closed the Halki Seminary, where the next generation of Orthodox clergy were trained. Death threats against Bartholomew are common.

Ankara, meanwhile, retains enormous leverage over the Ecumenical Patriarchate. Turkish law stipulates that only a Turkish citizen can be the Archbishop of Constantinople and the government does not recognise the Patriarch’s ecumenical status. Given Turkey’s dwindling population of Greek Orthodox, now numbering less than 2,000, the Church draws candidates from around the world who then receive citizenship by Ankara’s grace alone. This discretion enables Ankara to influence decisions on the choice of Patriarch.

The toxic rhetoric targeting the Ecumenical Patriarchate is not only the purvey of the Islamist press; neo-nationalist outlets also amplify “fifth column” conspiracies. A typical example from the daily Aydinlik says the Patriarch is the “agent of both America and the American Greek diaspora. Not only in religious issues, but in East Mediterranean geopolitics … he doesn’t even need to hide it anymore.”

Bartholomew thus finds himself the unwilling instrument of two ideological projects: one to re-unite the Russian Orthodox Church, split between Moscow and Kyiv, the other to divide and rule within Turkey’s polarized politics.

The seat of the Ecumenical Patriarchate, the Phanar, is a surprisingly humble building tucked in a corner of Istanbul. And yet, according to some Russians and Turks, this unassuming institution seeks to become the next Vatican.

When US Secretary of State Mike Pompeo visited Bartholomew I in December 2020, a youth group allied with Erdogan accused Washington of “attempting to create a Vatican and a Pope from the Christian Church in Phanar”. Less than a month later, Patriarch Kirill accused his counterpart in Istanbul of consolidating power on a “papal” model.

In a January interview with the Greek newspaper, To Vima, Bartholomew denied harbouring “papal pretensions.” He pushed back against Russian accusations, stating that he cannot allow “the federalization of the Orthodox Church”.

The ecclesiastical debates witnessed today are nothing new. They reflect 18 centuries of tension between church politics and geopolitical realities in which, over two centuries, the contours of the various Orthodox patriarchates have tended to conform gradually to nation-state borders.

Western leaders take secularism so for granted that they do not fully appreciate the role churches can play in power politics, which diminishes their ability to counter moves by the likes of Putin and Erdogan.

This failure to recognise Bartholomew I’s quandary, which goes far beyond ecclesiastical infighting, reflects the transatlantic alliance’s inability to take the role of religious narrative in authoritarian regimes seriously, leaving vulnerable minorities at their mercy.

Western leaders would better serve the secular agendas of democracy, human rights and personal freedom by offering more robust support to the Ecumenical Patriarchate, caught in Russian and Turkish crosshairs.

Aykan Erdemir is a former member of the Turkish parliament and is the senior director of the Turkey program at the Foundation for Defense of Democracies. Twitter: @aykan_erdemir

John Lechner is a former financial analyst and is now a graduate student at Georgetown University’s School of Foreign Service. He writes on the politics and languages of the former Soviet Union, Turkey and Africa. Twitter: @JohnLechner1.

The opinions expressed are those of the author only and do not necessarily reflect the views of BIRN. 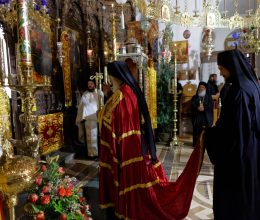 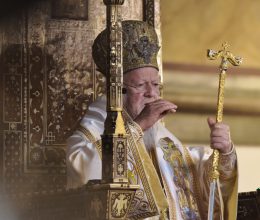 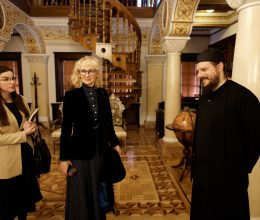