Twenty years ago, on this day, day of commemorating St. Martyr Hierotheus of Athens and our Most Revered Father Paul the Simple, happened the holy re-consecration of the Bigorski church dedicated to the Holy Forerunner and Baptist St. John. Three years before that there was a revival of monastic life in Bigorski, when in summer 1995 according to the enlightened and divinely wise decision of His High Reverence, the Metropolitan of Debar and Kichevo Mr. Timothy, came the first inhabitants of the Monastery, our Elder Archimandrite Parthenius and Fr. Hilarion (present Metropolitan of Bregalnica), so finally it was the right time for the old church of the Forerunner, which was defiled in the time of the communist regime, the Holy Altar was dug into and at one moment even animals were kept there, to be re-consecrated again. The ceremonious act of re-consecration was preceded by a long-lasting and painstaking effort of the young Abbot and his small fraternity: providing at least basic conditions of life in the half-ruined monastic hospice, filled with mice and bats; cleaning out the great quantities of garbage throughout the monastery; reviving of the daily Typikon of Divine services, cleaning, conservation and embellishing of the desolated church. So finally, after all that hard work, the time came for the re-consecration of the silent and yet roaring witness of the faith of our ancestors.

The great event took place on Saturday, 17th October 1998. That day the monastery was filled with faithful from all around Macedonia, and the atmosphere was prayerful, worthy of such an act. The Holy Liturgy was headed by the Metropolitan of Debar and Kichevo Mr. Timothy, co-celebrated by the Metropolitans Mr. Stephen of Bregalnitsa and Mr. Naum of Strumitsa, as well as by the Bishops Mr. Agathangelos of Velika and Mr. John of Dremvitsa.  The Charter which was placed inside the Holy Altar said: “This sacred act was performed after the Monastery has been returned by the Government to the Macedonian Orthodox Church in 1991, due to its sacrilege in the past period.” In his sermon during the re-consecration, the Metropolitan of Bregalnitsa Mr. Stephen, among the other things, mentioned that under the guidance of the spiritual Elders – Abbots Metrophanes, Arsenius, Joachim and others, who were founders of this wonderful Monastery, the faithful people built through the history this worldly renowned Bigorski Monastery upon the old foundations which dated back to the XI century.  Truly this sanctuary amalgamated the entire master skill and elegance of the diligent craftsmen groups from Gary, Tresonche, Lazaropole, Galichnik, Bitushe, Debar and other places which made this area famous for exceptionally great craftsmanship.

The Metropolitan Mr. Stephen then said that every time he comes to this Monastery, he is overcome by an especial feeling of spiritual joy and admiration, a spirituality which has always emanated from this inextinguishable lighthouse of ours, and which had nourished our ancestor for centuries; that’s the case even today. “Here”, Mr. Stephen stressed, “as nowhere else in this world, the Divine and the human intermingled, and one would ask what is better: that which God the Creator gave this place, or that which the human craftsman built in this space. And you always ask yourself the same question – which is the most beautiful and precious: whether the church with this magnificent dome, or the unique iconostasis, or the icons and fresco-painting, or the hospices, porches, refectories, whether the taps and the inexhaustible waters…”

During the meal in the monastery Refectory, the numerous guests were greeted by the Metropolitan Mr. Timothy, who at the end of his festive address stressed the following: “In this occasion I would like to express my gratitude to the Most Honorable Archimandrite Parthenius and his brothers for the immense effort they put to revive this sacred sanctuary of ours. Especially regarding the preparation for the re-consecration. I wish that our Lord and St. John the Baptist bestow upon him all their blessing and multiply his brothers so that the monastic community could grow spiritually and keep the monastic rules intact, just like they have been conveyed to us by the founding fathers of this Monastery in 1800, first by Fr. Arsenius and all the way to the last one Fr. Spyridon. I would also like to express my warm welcome to all of you brothers and sisters and thank you for your presence with which you have enriched this ceremony…”

We enclose several photos from this historical event. 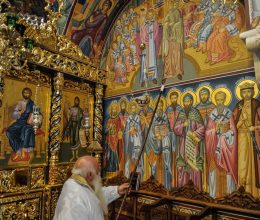 Consecration of the chapel dedicated to Saint Nicholas the Wonderworker 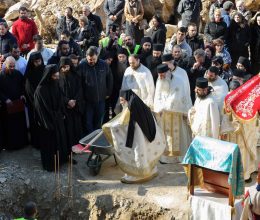 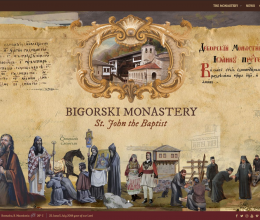 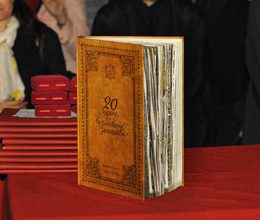 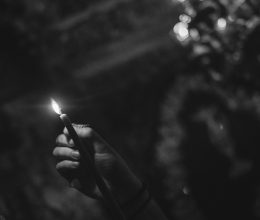