Archimandrite Dositej, a monk of Bigorski Monastery, celebrated the Divine Liturgy today in the Church of St. Bartholomew the Apostle and St. Prohor of Pčinje in Piacenza, Italy, at the invitation of His Eminence, Metropolitan Pimen of Europe of the Macedonian Orthodox Church, and with the blessing of our local bishop, His Eminence Metropolitan Timotej of Debar-Kičevo and of our Elder, His Grace Bishop Partenij of Antania.

Metropolitan Pimen had invited Father Dositej on the occasion of the church’s patronal feast, Saint Prohor of Pčinje. The bishop and archimandrite were joined by a large number of faithful as well as Archpriest Kliment, the parish priest, Archpriest Gregory of the Orthodox Church of Romania, and Archpriest Goran Mantaroski, priest of the Macedonian Orthodox parishes in Lausanne and Triengen.

Among those at Liturgy was the mayor of Piacenza, Mrs. Katia Tarasconi, and the Macedonian consul in Italy, Mr. Stojan Vitanov.

In his homily for the feast, Metropolitan Pimen spoke of Saint Prohor’s wondrous, edifying life. Using his holy life and exploits as an example, Metropolitan Pimen called us to live in Christian unity, not to hate or persecute our enemies, or even to refer to them as our enemies. On the contrary, as Christ’s followers, we are called to have forgiveness and love for all people.

“When his parents wanted Prohor to continue on their family by marrying, the Saint was in Church and heard Christ’s words that the one who loves father and mother more than Christ is not worthy of Him, so he moved away from the city, from his parents and society, so that he could achieve perfection in the stature of Christ. By praying without ceasing, He thus fulfilled the words of Christ and put them into practice so that He truly loved God above all else. He did all this not only for his own salvation, but also to give us all an example of how we are to be distinguished from all other people: with our love not just for God and our neighbor, but also for our enemies. How could we walk towards eternity if we stopped to return every stone thrown at us? It is not ours to throw back those stones, but we are to pick them up with thanksgiving and use them to pave the way to eternity so that both our neighbors and our enemies can walk the path we have made with them to reach where we have been called since we were created. This is why we should also love our enemies, thank God for them, and pray for them.”

Then, the Bishop asked Fr. Dositej to speak, who then thanked the Metropolitan for his invitation on behalf of our Elder, and presented the Metropolitan with an image of the Bethlehem icon of the Most Holy Theotokos. The icon had been brought from the Holy Land in honor of the first time a hierarch of the Archbishopric of Ohrid celebrated Divine Liturgy there in over two and a half centuries. Archimandrite Dositej taught the faithful that our basic genetic code is Orthodoxy and therefore we should get to know it and begin to cultivate it. He also emphasized that the Church is not only church buildings, but, above all, it is the faithful gathered around their Bishop, because, according to the words of St. Ignatius of Antioch, “Where the Bishop is, there too is the Church.” 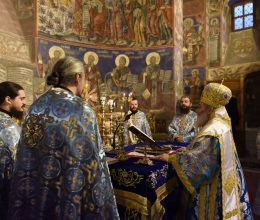 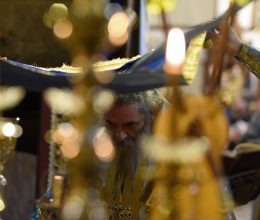 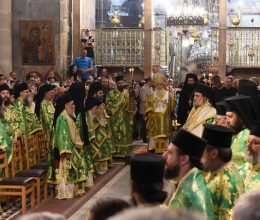 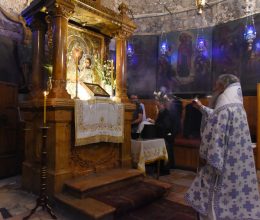 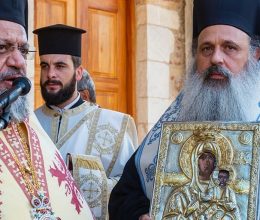